The results weren’t forthcoming…in fact..they took blooming ages.  Waiting is sooooooo freaking frustrating!!!  As Mayhem only needed oxygen at night during the day we were pretty much left to our own devices.  Chaos was with hubbie in RMH so we did everything we could to try and keep it as ‘normal’ as possible for him.  The ward rounds in K2 didn’t include us because we weren’t under Cardiology and Oncology came to see us around tea time (for any non-Northerns this was anytime from 4-6pm).  We stuck around some days, when we thought we might hear some news, or we’d go to the nearby parks and pop back for mealtimes.

When it was nice weather we borrowed a pram either from K2 or from Ronald McDonald House, took out a jar of baby food for Mayhem and used a breastfeeding voucher to grab a sandwich; you have got to love the NHS in this respect.  If it wasn’t for the fact that the NHS fed the breastfeeding mother, we wouldn’t have been able to survive financially staying in hospital for so long (yet another reason to love breastfeeding!).  I don’t know how some of the parents managed it, especially some with longer stays than us, some families without a light at the end of the tunnel.  The scariest thing in the world for me were the babies that were left.  Abandoned.  Some parents simply went home.  I understand that everybody has different circumstances, some families might not be able to organise childcare for other siblings, have issues that I simply couldn’t comprehend…but seeing those helpless children crying for their parents on the ward, the nurses overstretched doing the job of a parent, looking after all these (dare I say it) neglected babies.  It broke my heart.  Whatever the circumstances in my life, I was lucky enough to be there with my son.  There was no way either of us would ever, ever, leave him alone in hospital.

When we were out and about, despite the extra large big dark cloud hanging over us, we managed to have some wonderful days out.  Chaos in the loan pram and Mayhem breastfeeding and sleeping in the Boba carrier we headed out as much as we could to try and keep sane.  Albert Docks is a great place to hang out with kids, the Tate is a fantastic place for firing the imagination of 30 month old Chaos and a great space to run around in.  We found a gem of a cafe there, Ziferblat, where you pay per minute that you are there, per person (kids free), then everything, food, drink etc. was free.  It was like a home from home and you even made your own tea, toast and cereal.  There was games and toys to keep the kids occupied and cake and biscuits.

We went for Japanese, to the World Museum, hung out in cafes and cake shops, trying to forget we were waiting…Keeping the kids busy.  Croxteth park and hall was another walk away from the hospital.  An amazing adventure playground, mini train around the grounds and small petting farm.  We had booked to go away to Wales for my mum’s 70th and obviously had to cancel, life did go on, but not fully for us, we were in limbo. 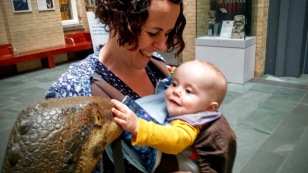 Every Friday we seemed to be given a bombshell, so we called it bombshell Friday.  Dr James Hayden kept coming up to see us, as he phrased it, whatever information he knew, he passed onto us.  We were kept in the loop, even if he had no definitive answers, he would tell us what he knew.  The biopsy results were inconclusive, they couldn’t tell what sort of tumour it was, they had sent the results to Great Ormond Street Hospital, there was even talk of getting a crew together and sending us down there in an ambulance, which we really didn’t want as we wouldn’t have family nearby, but they kept looking and waiting for the pathology results…for us, it meant lots of Dr Google searches for Teratoma, Thymoma and mediastinal tumours…

One thought on “Waiting for Biopsy Results…Yawn!!”