The Boy That Never Slept Through

When you become a parent you inadvertently become obsessed with sleep patterns, food consumption and bowel movements.

Never in my life have hubbie and I interrogated each other so on the latest poop or poonami, what colour, size, texture and shape…?  How often?  Was it normal? Is he alright?  Does that mean he’s ill…?

Did he eat the green stuff?  How about the hidden veggies?  How much?  How often?  Is it normal?  Is he alright?  Does that mean he’s ill…?

I never needed to ask any questions about sleep though…because I knew.  I knew that sleep was the biggest obstacle for our youngest boy, Mayhem.  The most tiring, debilitating and zombie inducing  experience.

I suppose sleep was also linked with food with Mayhem as he just couldn’t seem to sleep longer than his appetite allowed.  The Mombie newborn phase just never seemed to end.  The cluster feeding definitely slowed down but he literally could not sleep for longer than 2 hours at night without needing a feed!  Oh and two hours was on a good night.  Daytime naps were considerably worse and during the day he couldn’t sleep longer than his forty-five minute sleep cycle without waking up for a feed.  He was a ravenously hungry boy who just simply needed regular feeding and needed the boob to sleep.

We figured it out and came up with a new way of working; I learnt how to feed him whilst he was in a carrier during the day and we co-slept at night.  Life had to go on as there was also Mayhem’s older (by twenty months) brother to entertain and keep up with.  I put a lot of his constant feeding down to the fact that he struggled to breastfeed due to tongue-tie and because he was unwell with, what turned out to be a benign tumour (teratoma).

So we kind of got used to this broken sleep and constant need to feed and just got on with it.  Mayhem would go to bed at night and just wake up, a lot.  Luckily I didn’t have to work, otherwise I would have been a total wreck.  It’s been just over a year now since his surgery, and he’s completely healthy now so there’s no reason at all that he should keep waking up  at night…try telling him that!!

We recently moved from Portugal to Spain and Spain must agree with Mayhem because he’s finally sleeping for longer stretches.  Something’s changed.   Maybe he’s finally caught up after dropping so many percentiles when he was ill.  Maybe he’s realised he can get to sleep without the constant need for the boob.  Maybe just maybe he’s realised an emptyish tummy doesn’t always need filling, although when he’s awake he eats food like he’s starving and shovels it down by the fistful.  Or maybe he’s just growing up.  He’s just about to turn 23 months old, in a month he will be two years old!

But on Saturday night, for the first time ever, he did it.  He finally slept though the night.  After protesting at going to sleep and then eventually falling to sleep by 8.00pm he slept until 5.55am….WOW!!!

Unfortunately he’s not replicated this momentous feat since and the last few nights have been ‘busy’ to say the least but now there is consolation, now there is hope…if he’s done it once he can do it again…Yes!!! 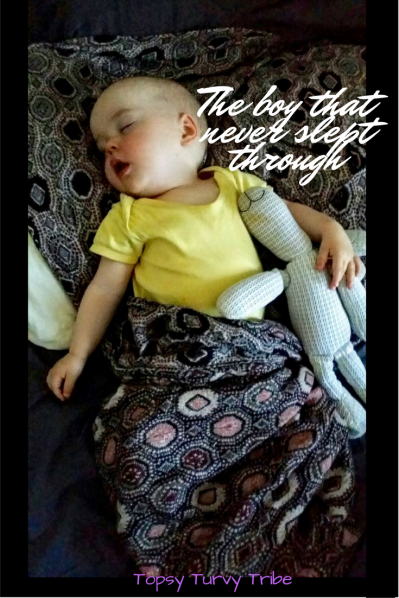 58 thoughts on “The Boy That Never Slept Through”