Ronda, Spain with Toddlers in Tow

Ronda is a stunningly located hilltop city in the Malaga province in beautiful Andalusia, Spain.  With around 35,000 living there, it is a small city with a friendly feel.  Ronda offers an impressive blend of architectural delights, culture, dramatic views and history and is one of the most visited and oldest cities in Spain.

Here are our top five places to visit:

Spanning El Tajo (the gorge) at over 100m in height is the Puente Nuevo (New Bridge), which truly is a breathtaking sight with unforgettable views.  The bridge was finished in 1793, after taking 42 years to build and fifty workers were killed during its remarkable construction.  The bridge is the heart of Ronda and divides the Casco Antiguo (old town) and allows access to the Casco Moderno (new town). 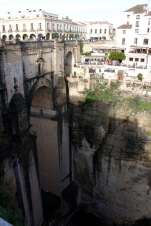 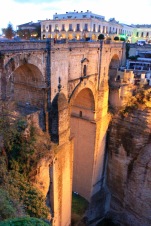 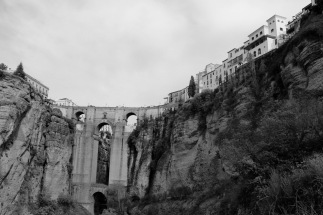 To get the best views of the bridge walk down along the Camino de los Molinos, accessed just near the Mondragon Palace, in Plaza del Campillo Ronda, the square of Maria Auxiliadora.  The full ruta 3 (route 3, SL-A 38) is 4.6km long and well sign posted.  For the less experienced walkers or for those with time constraints only 10 minutes walk in, after quite a few steep steps downhill, there is Mirador del Puente Nuevo; a viewing area where you can see the bridge in its full glory.  Wow!

2.  Palacio del Rey Moro y La Mina – Palace of the Moorish King and the Water Mine €5, open from 10am

The Palacio del Rey Moro, was confusingly, never really a palace for a Moorish King, as it was built in the 18th Century.  The Palacio or Casa del Rey Moro is in need of a lot of love and restoration and is currently closed to the public but the beautiful gardens and unmissable water mine is still open.  Visiting these give you a little insight into opulent the palace once was.

The gardens are now a national monument and cultural heritage site.  Designed by the great French landscape architect Forestier in 1912, who excelled at gaining a massive appreciation of Andalusian gardens using Hispano-Moorish origins combined with a Western European influence.  The gardens offer stunning vistas across the old town of Ronda and the gorge.

The main reason for visiting is to see the genuine relic of Ronda’s Moorish occupation and an amazing feat of engineering, the water mine.  The secret mine was built in the 14th Century when Ronda was on the border between Castile and what became the Nastrid Kingdom of Granada.  Ronda was constantly under attack and the city’s water supply needed protecting.  In 1485 the mine was finally taken by the Catholic monarchs who reclaimed Ronda by cutting off access to the mine and therefore the town’s water supply, forcing the thirsty locals to surrender. 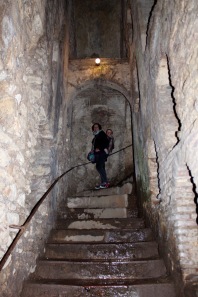 The mine itself is reached by descending stone steps carved into the rock.  The steps zig zag down into the mine and open up into different vaults and rooms, until you reach the river below.  It is hard to imagine that chained slaves once stood on each step and hauled water from the river 80 meters below the city, supplying Ronda with its only water source.  The steps were badly lit, pretty uneven, wet and slippy when we visited so proceed with caution.  There is also only one way up and down, but it is definitely worth the 300 or so steps for the experience, when you reach the tranquillity of the river far below Ronda and soak in the peaceful atmosphere.

Inaugurated in 1785, the oldest bullring in Spain is constructed entirely of stone and built by the same architect who built the Puente Nuevo, Jose Martin Aldehuela.  It is said to be the home of modern day Spanish bull fighting, mainly thanks to Fransisco Romero, a native of Ronda, who is also credited with introducing the bullfighter’s muleta, a red cape used in conjunction with a sword.  His grandson, Pedro Romero is said to have been the greatest bullfighter in Spain.

Inside the bullring, actually underneath the bullring’s seats is the Bullfighting Museum containing exhibitions of art, firearms and one of Spain’s greatest collections of bullfighting memorabilia.  Despite your personal beliefs on the ‘sport’ of bullfighting, the Plaza de Toros is worth a visit to marvel at the sheer size of the place and to witness an integral and fascinating part of Spain’s history and culture.  You can also visit the attached riding school, where you may be lucky enough to witness a riding lesson. 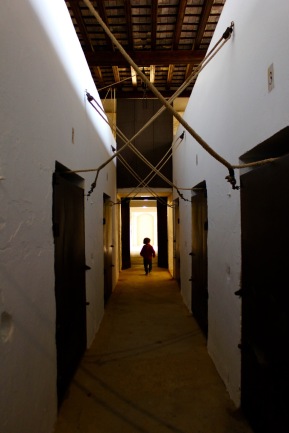 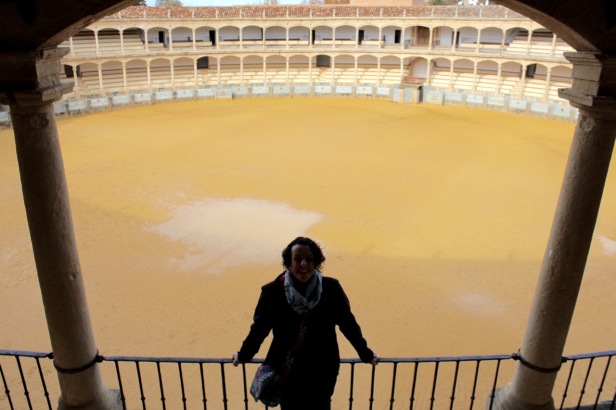 Despite only having seating for 5,000 the bullring is hailed the largest in Spain, as the rueda (arena) has a huge diameter of 66 metres (217ft), which is actually the largest in the world!  The building itself is full of nooks and crannies and beautifully built; It’s a great place for ‘Daddy bull’ to play hide and seek!

The original palace of the Moorish ruler Abbel Maliek, the son of the King of Morocco.  The palace itself is relatively small and heavily renovated but the beautiful inner courtyards, original tiling and Mudejar ceilings remain.  The building is now home to Ronda’s museum, with some insights in the history of the area and some rather amusing exhibits.

The water gardens are Palace’s the best feature and are a miniature version of the Generalife in Granada.  The water gardens sit on the edge of the cliffs of Ronda, offering superb views of the valley and gorge below. 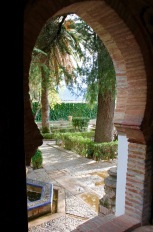 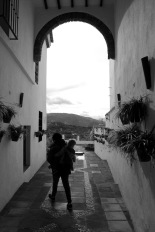 The best preserved example in of Arabic baths in Spain.  When you first arrive it may seem a little small and unassuming but once you watch the informative film, played in the depths of the baths, you realise what surrounds you and the place literally comes to life.  Our two year old, Mayhem wasn’t that interested in the film but our three year old, Chaos was absolutely fascinated.  After watching the film he proceeded to run around the site and tell us where everything was ‘in the olden days’.  He was totally intrigued that a donkey used to turn the water wheel. 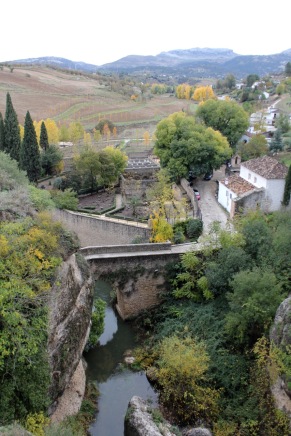 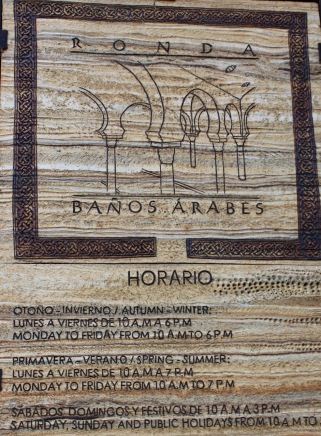 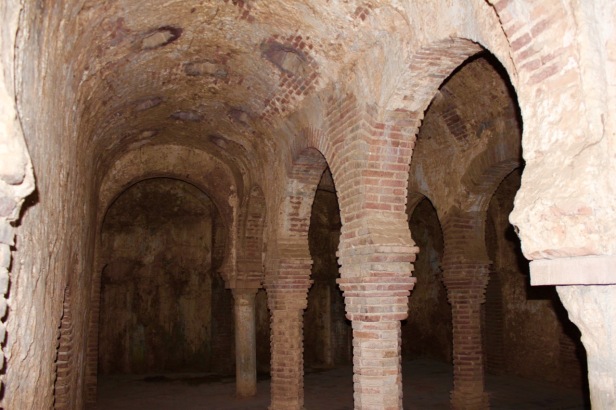 What else in Ronda?

Alameda Del Tajo, walk along the Calle Virgen de la Paz to the Alameda de José Antonio. This beautiful 18th-century park has a broad promenade. The park offers sensational views and is a great place for romantic strolls and sunset views of the gorge. 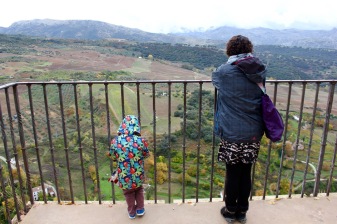 Ronda Wine, like the rest of Spain there is some amazing wine in Ronda.  The Ronda reds are Crianza and Tinto Joven. Ask for vino de Ronda with your meals or tapas and visit a Bodegas to sample a few of the favourites, the excellent Entrevinos bar is worth a visit.

There is also an excellent local sweet desert wine which comes served chilled and provided complementary following a tasty meal at La Alacena.

Our toddlers had a great time in Ronda, the locals are incredibly friendly and family orientated. There are many open uncrowded spaces and attractions to explore where they can let their feet and their imaginations run wild; including the City Walls, Bullring, Water Mine, Arab Baths and Palace Gardens.  Ronda is small, but has a great mixture of modern streets, cobbled streets, plazas and parks. We parked for free in Calle de Sevilla approximately a 5 minute walk to the Bullring and explored the whole of Ronda on foot, our three year old also walked most of the time around Ronda. 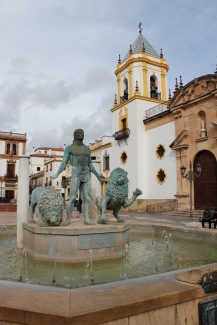 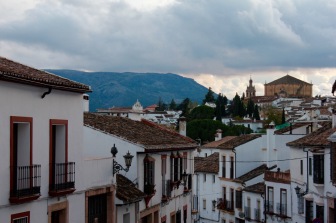 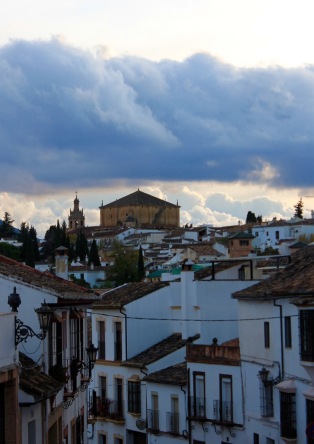 Lunch begins from 2pm until around 4pm then most places close for a siesta.  Cena (dinner) is usually from 8pm.  We are still on UK time and arrange our meals about the children, who are usually tucked up in bed by Spanish dinner-time but luckily, as Ronda is well used to tourists there are places to eat outside of these hours, although you may well find yourself eating alone or in a very quiet venue!

The children, and us obviously liked the well-known Daver a confiteria, cake shop heaven on Calle los Remedios. 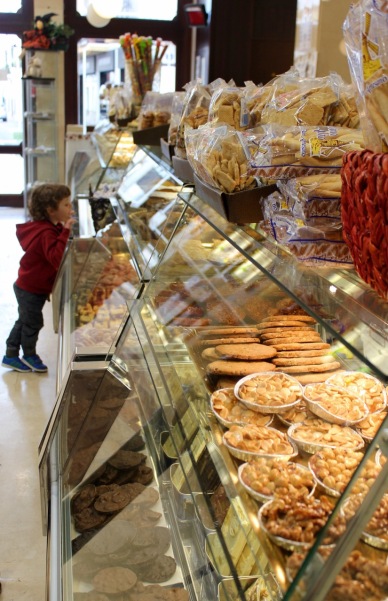 The previouslly mentioned La Alacena serves traditional local dishes and the freindly waiter strongly recommends the ‘bulls tail’ as he kisses his finger and thumb.

The Casa del Jamon is all things jamon, a massive cafe/ deli/ butchers if you want to buy a €300+ 100% iberico jamon and a  €100 + bling jamon stand to go with it, this is the place. It also serves a lovely jamon on toast, coffee and orange juice for €4.50 and has a nice play area for kids too.

There are so many places to eat in Ronda from generous scoops of chocolate ice cream on the main shopping street to eating outstanding value tapas with the locals in the Tren district at the busy bar cafeteria El Castano.

Blanco Y Negro on Calle Pozo is a cafeteria and Heladria with a difference and well worth a visit if you are in Ronda with kids as it has an attached small two level soft play area.  You can sit right next to the soft play area and keep a watchful eye on the kids or escape for a peaceful cake and coffee into the main café area for the bargain price of €1 per hour, per child.

There are a lot of narrow pavements and steps If you have a pram/buggy but the layout of Ronda is really easy to navigate around, the must see tourist attractions are all close together and there are free maps available with free parking in the street.   It was noticeable that more parking spaces became available after 2pm, when children were picked up from school.  It is easy to walk everywhere and you can easily see all the city’s main highlights by foot.   You will definitely not need a car!  The coach trips will head back to the costas in the evenings and then the locals will re-claim the city.

Having an apartment is so much easier with kids,  especially with little ones.  You can have space and relax with a glad of wine in the evenings,  rather than trying to keep quiet in a hotel room whilst they sleep!  Airbnb have some great apartments in Ronda, live like a local, stay in the centre of town, chat with the owner about their favourite parts of the city and enjoy all that the wonderful Ronda has to offer! Use this link for £25 travel credit with Airbnb and we get a little something off our next booking too , enjoy!